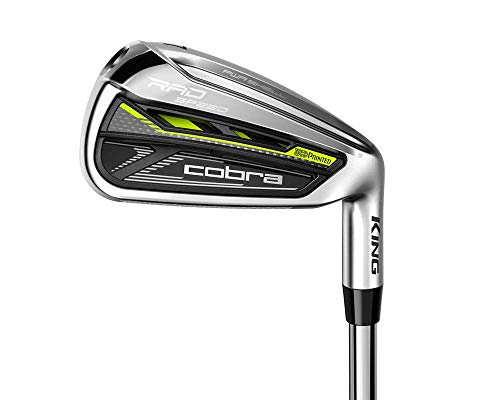 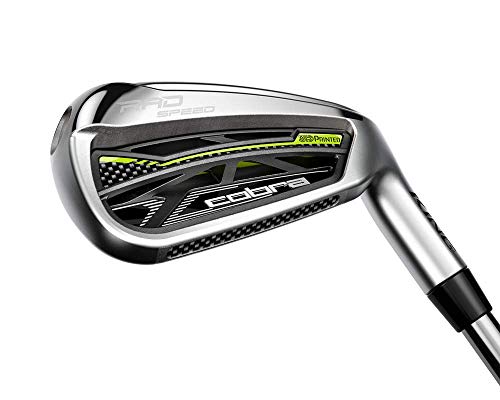 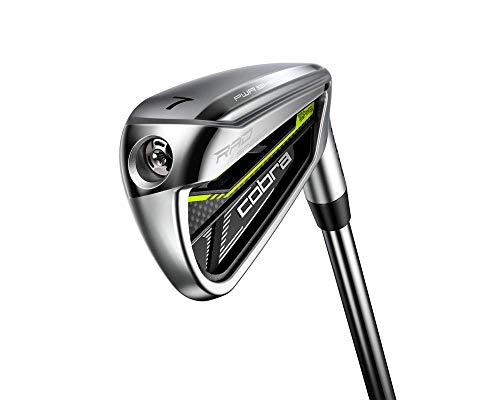 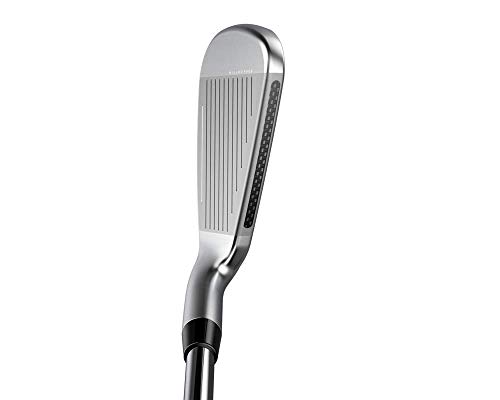 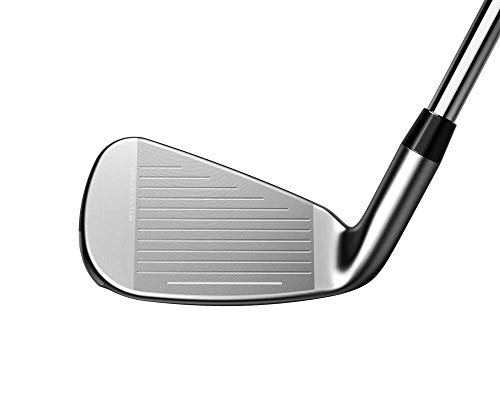 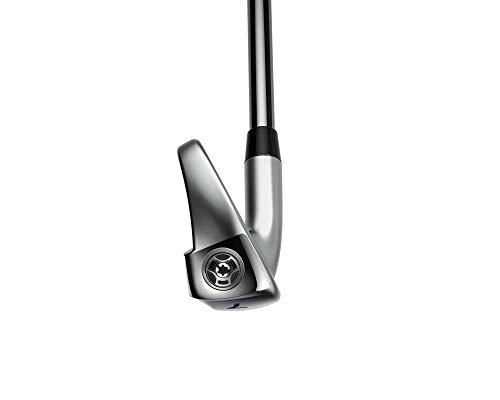 So you’re in the market for some new irons after you’ve spent the weekend watching Bryson Dechambeau hit 9 irons over 200 yards?

Well, we have something for that… introducing the Rad Speed irons by Cobra! The game improvement irons riddled with technology to help you hit it further!

Cobra has been front runners in the innovation game over the past decade and it’s no surprise their R&D attracted the golf scientist himself. You’ll do well to find a player who wouldn’t gain from the technology integrated into the Cobra equipment.

Whether you’re a professional like Bryson or a Hacker off a high handicap, there is something in the Cobra Rad Speed irons for all. Let’s break down what makes these irons so special and how Cobra has changed the design game:

First things first, the Cobra Rad Speed irons are the first ever golf clubs to have 3D Printed parts. The rad speed irons feature a 3D printed medallion on the back of the iron head. Which, according to the Cobra R&D team, is built up of a ‘lattice structure’ which reduces the swing weight and shifts the center of gravity to lower on the face.

A lower center of gravity makes it easier to launch the golf ball in the air, allowing golfers to hit the ball on a high trajectory making front pins more accessible.

The iron gets its name ‘Rad Speed’ thanks to the new Radial Weight technology, which will be integrated across all the irons in the new Cobra improvement iron range.

Having weight lower in the face gives irons more forgiveness and makes the face more sturdy through impact.

The 2021 Rad Speed irons have weights in both the toe and the heel of the golf club. The goal of the weights in the club is to help the 3D printed lattice lower the center of gravity in the face and ultimately make the club easier to use for all golfers.

The 2021 irons also come with a strip of carbon fiber on top of the iron head. Despite the goal of the carbon fiber strip being to reduce the overall weight of the club, the carbon fiber aids in breaking up the top line and giving it a thinner appearance.

Game improvement iron gets a bad name due to their chunky appearance compared to bladed irons. However, this top line of carbon fiber notably reduces the ‘chunky’ appearance of the irons.

Any stats man will tell you, distance is king when it comes to lowering your scores. The closer you are to the green, the more likely you are to make a birdie, it’s just a fact. In the modern game, up-and-coming PGA Tour players are just built differently, they can bomb drives over 300 yards in the air.

However, it’s not just distance off the tee that’s important. The data still followed this trend throughout the bag.

So what if we told you your 7 iron could go up to ten yards further without any changes to your swing? That’s the data Cobra found with their Rad Speed Irons.

New for the 2021 release, Cobra has decided to give customers the choice of having Cobra connect integrated into their shafts!

Cobra Connect is an Artificial intelligence technology that automatically records your shots you hit during your round!

The clubs connect to a smart device such as an iPhone or an Apple Watch and provide golfers with a Range Finder, Recommend Club (based off tracked analytics built up over previous shots), Strokes Gained Analytics, and Caddie Advice. It’s literally like having a PGA Tour caddy built into your club and on your wrist.

The loft of a golf club is its face angle in relation to the ground. The Rad speed iron’s lofts are as follows:

The length and Lie of the Cobra Radspeed irons are standard, however slightly increase if Cobra Connect is added: 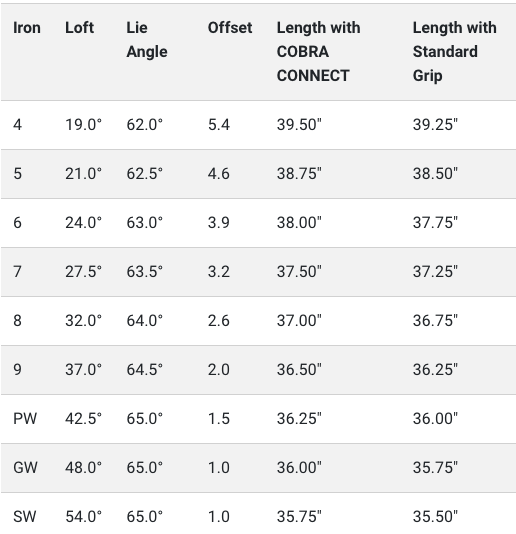 A golf club’s forgiveness is up there with the most important characteristics. We are all human and hitting the ball out the middle of the club face is difficult… I don’t care who you are, even the professionals struggle with miss-hits, this is why forgiveness is so so important.

Radspeed irons have so much technology built into the face that now, even with an off-center hit, the ball will still travel a similar distance to that of a well-struck shot. Furthermore, the ball flight will be straighter, enabling golfers to shoot better scores while not playing their best.

Suggested Reading: What Are The Most Forgiving Irons?

There are multiple tour pros across this globe that use Cobra and Radspeed irons. Look no further than the poster boys of Cobra: Bryson Dechambeau or even Ricky Fowler. They both game Cobra’s new Radspeed irons.

However, Bryson uses the One Length versions where every club including his pitching wedge is the length of a 7 iron (37.25 inches).

Can Low Handicaps Benefit From Using a Game Improvement Iron?

What is the Purpose of the Carbon Fibre Strip on the Radspeed Irons?

There are two main reasons for the Carbon fiber strip on the Cobra rad speed irons. The first purpose is weight. The carbon fiber reduces weight in the head of the iron which is important for lowering the center of gravity of the club. The lower center of gravity is what makes Cobra Radspeed irons so easy to hit.

The second purpose of the carbon fiber strip, is that it aids in breaking up the top line of the club. Many golfers prefer thinner and tighter-looking golf clubs and can be put off by the width and offset of game improvement irons. However, the strip drastically reduces the visual.

What is the Purpose of the 3D Printed Nylon Medallion on the Cobra Radspeed Irons?

The 3D printed Medallion allows the R&D team to get creative with the design and test out shapes and styles previously impossible. The purpose of the Nylon Medallion was to save weight and fine-tune feel for golfers using the Cobra Radspeed irons.

What Shafts and Grips Come with the Cobra Radspeed Irons?

Cobra has close ties with grip manufacture Lamkin and therefore, the Lamkin crosslink grips are stock on all the New Radspeed Irons. However, if golfers wish to have Cobra Connect in their clubs, then the Lamkin Crossline connect grips are available at a slightly increased rate.

As for golf shafts, the KBS Tour 90 Stainless Steel shafts

What are the Benefits of the Cobra Radspeed Irons Radial Weighting?

All the Radspeed iron sets have extreme heel & toe weighting. A 10g screw and a 3g screw are positioned on the toe and heel to help golfers increase swing speed, lower their spin and improve the stability through contact.

Many tour pros have made comments on the benefits they’ve felt of the weight placement and how it’s benefited their performance.

When it comes to performance, you want to be using a top club manufacturer. There’s little to no benefit in saving money going for a brand where golf isn’t their core value. The time, money, and investment spent in creating the best golf clubs is so important.

Look no further than Cobra, they provide equipment to the longest ever PGA Tour player. Bryson trusts Cobra and their team because of the performance guarantee they provide with their clubs.

You want to play with a golf club you can trust. You want a club to go the distance you expect it to. There’s little to no point in having a club in which one shot could go 40 yards further or shorter than the last.

Cobra’s investment in R&D and artificial intelligence has enabled them to make Radspeed irons the most innovative and highest-perming irons yet.